After having introduced the project in the first post of this series, I’ll try to take you along my efforts to accurately identify the bike. The bike was handed to me 3rd hand without that information - and let’s be honest, who really remembers the detailed bike model and year of a bike you bought 40 years ago?1

There are a number of things we can go by:

After some aimless research2 on the internet I first came across an interesting post in a forum (web archive). Now the website is in French and I’m afraid I don’t speak French, so Google Translate comes to the rescue3. 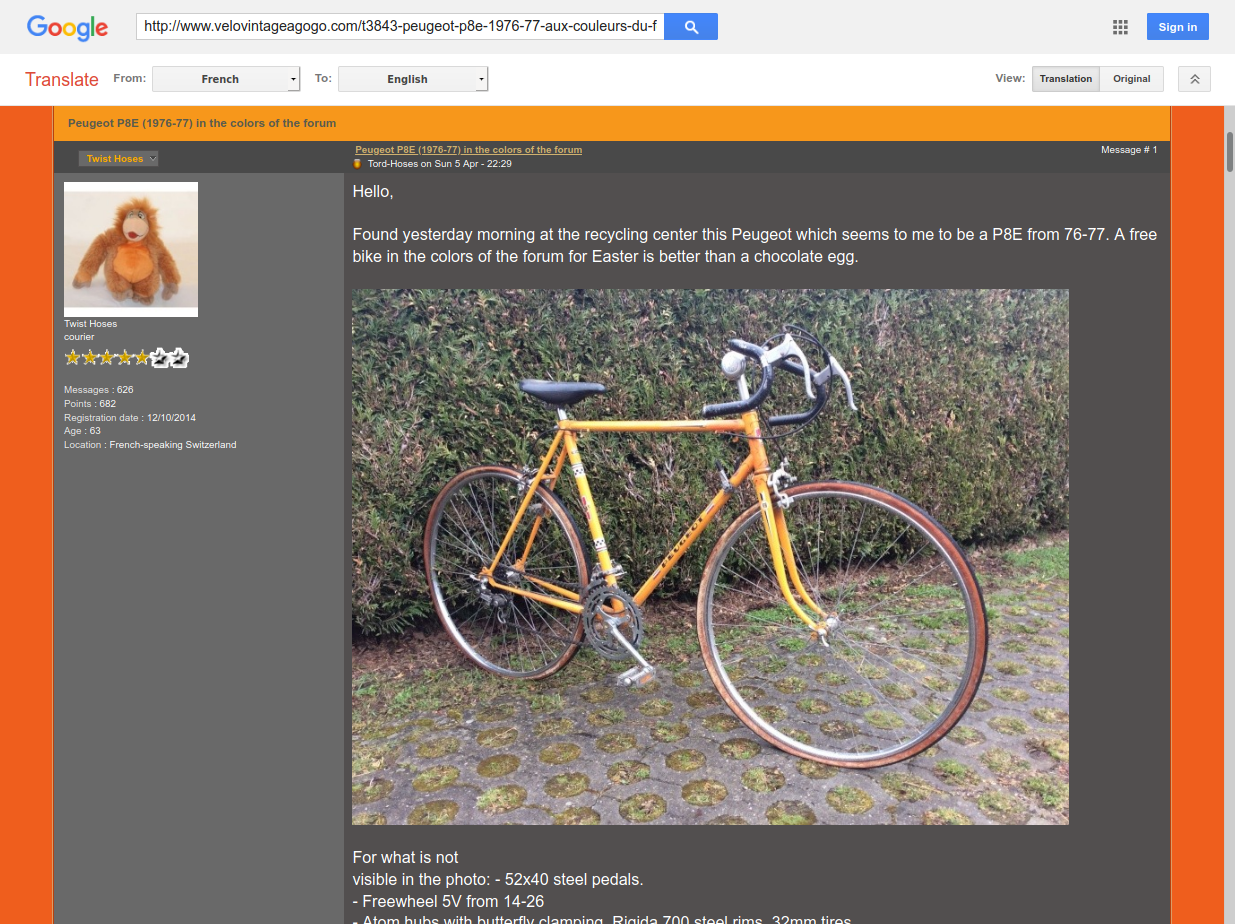 Naturally the translation is a bit rough, but here’s what one can draw from it: The bike in the pictures shares most attributes with the bike I have at hand, with the exception of some parts that clearly were upgraded/changed on my bike, e.g. break levers, saddle, bar tape. Furthermore my bike at hand sports a full set of mud guards and carrier. The author of the post guesses the bike to be a “P8E from 76-77”.

Sidetracking a little further down the post it shows that the front deraillieur broke on their bike, as well as them having major troubles with the crankset pins - they even broke a vice over that! This comes as a bit of a foreshadowing, as I’ll be describing my fight with the wedge pins in a later post ;).

Back to dating the bike. Further down the thread some suggests it’s a so-called “half-race”, rather dated in 1972-75. Having something to start by, let’s examine some further hints. After some web searching and countless websites I came across the follwing page (web archive):

It shows an interesting picture right at the bottom of the website:

Now this appears to give us a great indicator of the year the bike was built. Thankfully the head badge is well preserved on my bike. 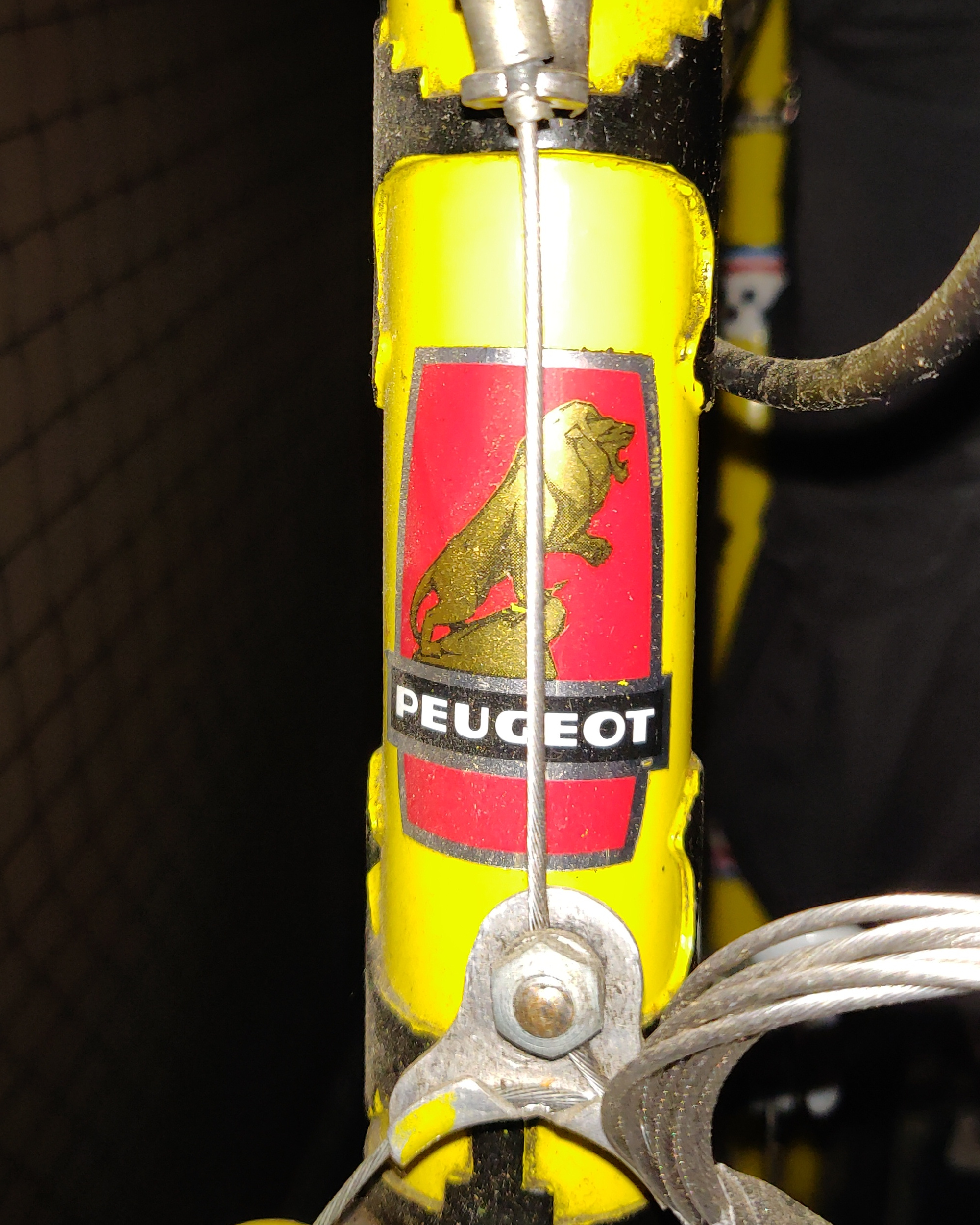 Head Badge
The head badge indicates that the bike’s was born somwhere between 1975 and 1977. Furthermore many websites on the internet debate on the date-ability of french bikes according to the serial number, including the mrvelo-site. It says that it’s impossible to date Peugeots by serial number before the year of 1979. This comes as a relief to me, because I haven’t actually found a serial number on this bike yet. If it shows up under the dirt, I’ll update this post.

Now if we follow the link from mrvelo we.. well, it’s dead. All hail the web archive. So if we follow the link into the web archive, we find a collection of Peugeot bicycle catalogues. The 200 year special edition presents the already discovered collection of badges, officially (a.k.a. Peugeot) confirming that the bike is from 1975⁄76, maybe 1977. Unfortunately the website only holds catalogues from the years 2009 and 2010, so we need to look for Peugeot catalogues from the desired time elsewhere. Thankfully the wonderful website peugeotshow.com holds a collection of Peugeot bicycle catalogues and so does BikeBoomPeugeot.com. The catalogue sets are fragmented, but hope is to piece it together from both. From here we can go and browse catalogues, trying to identify the bike with decals and components - and of course frame colour.

The bike at hand sports: 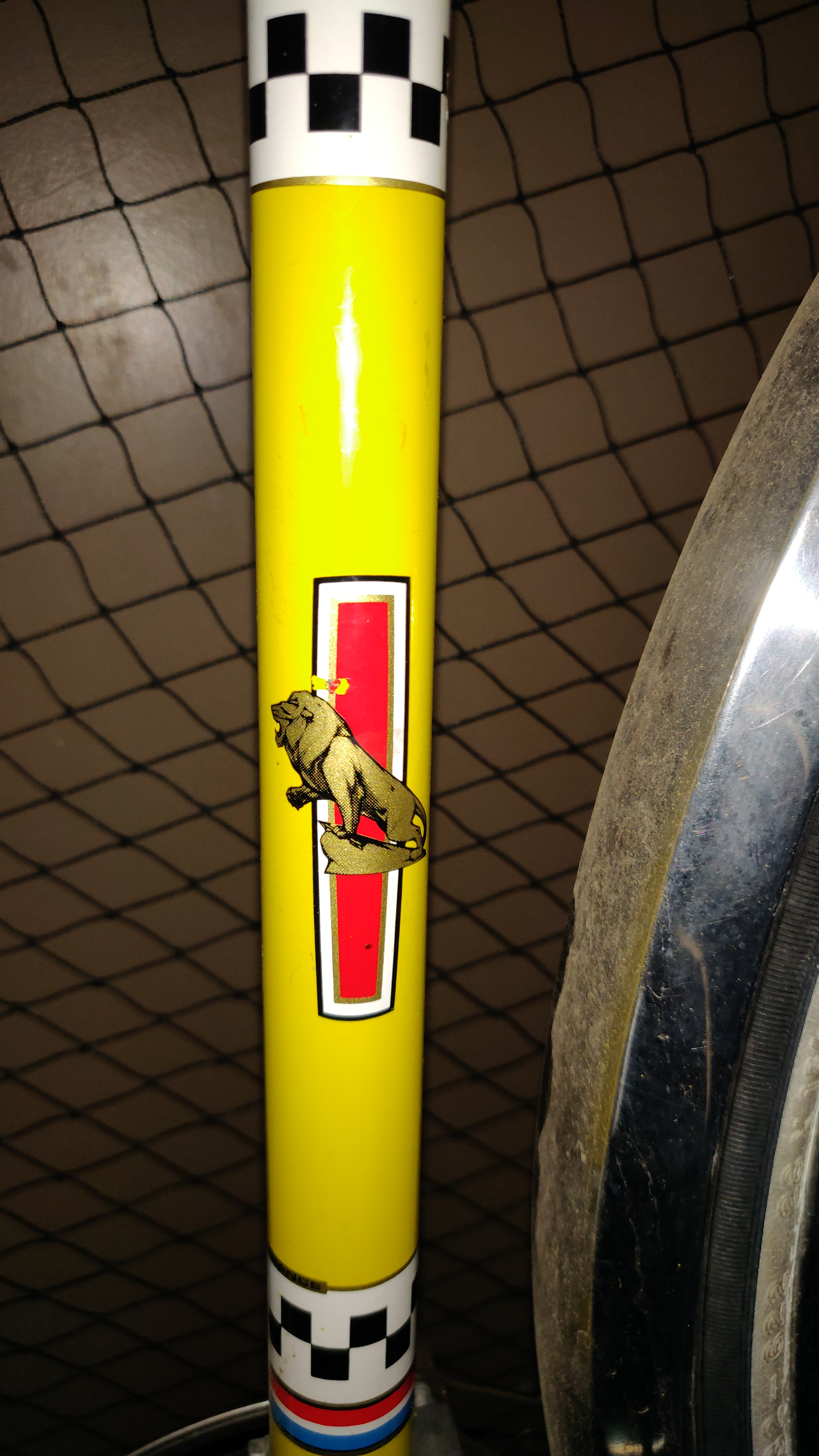 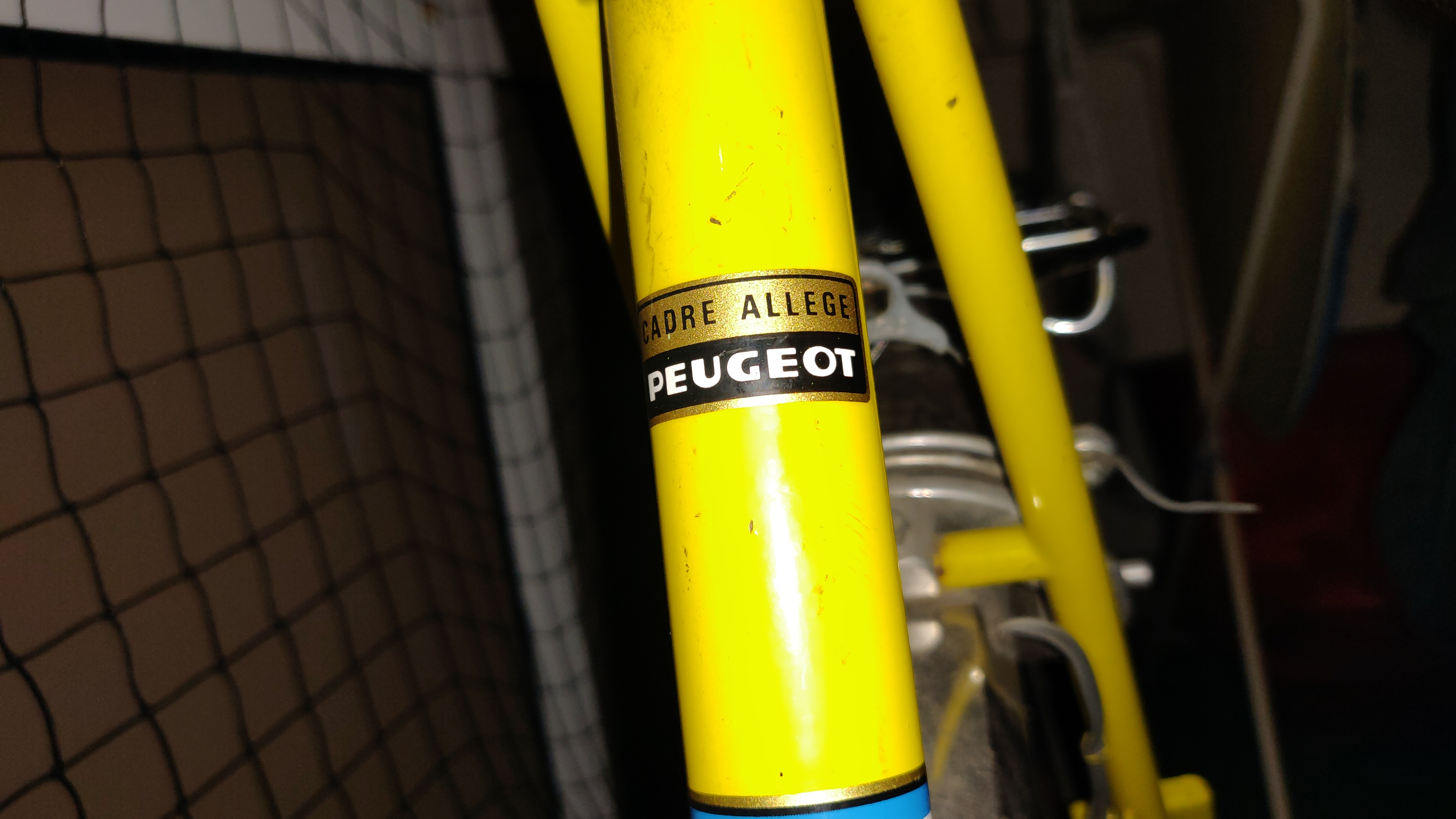 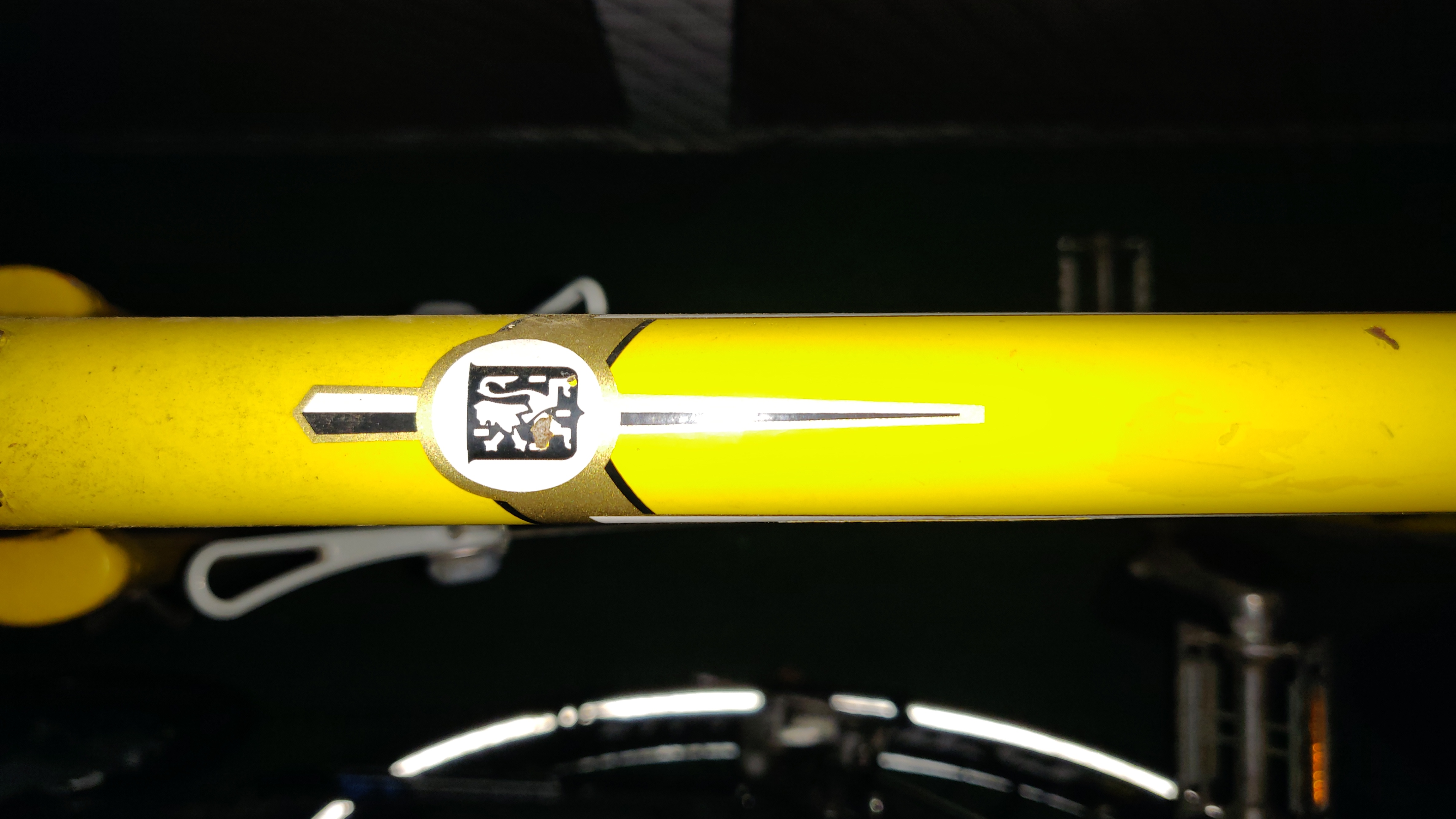 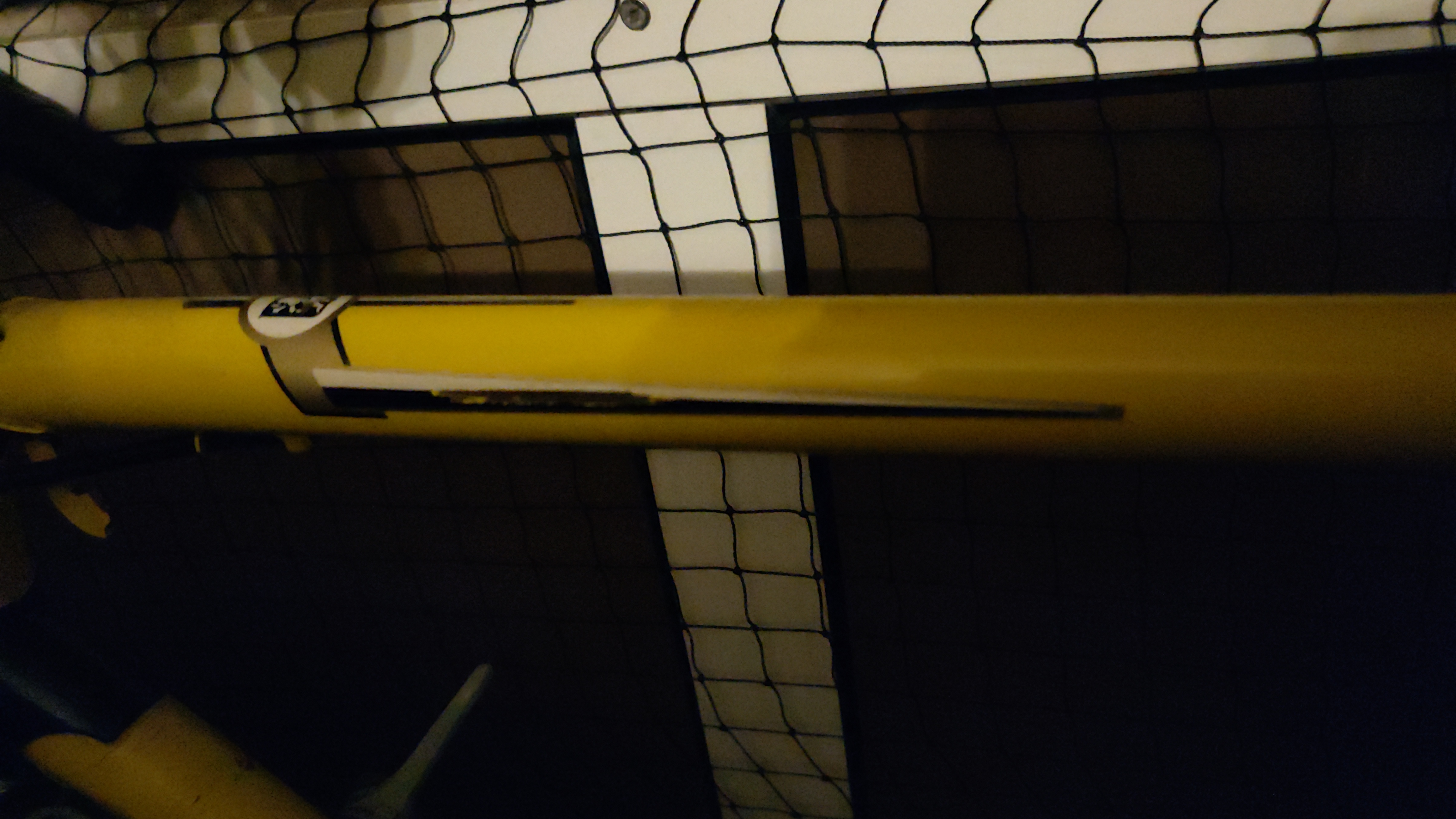 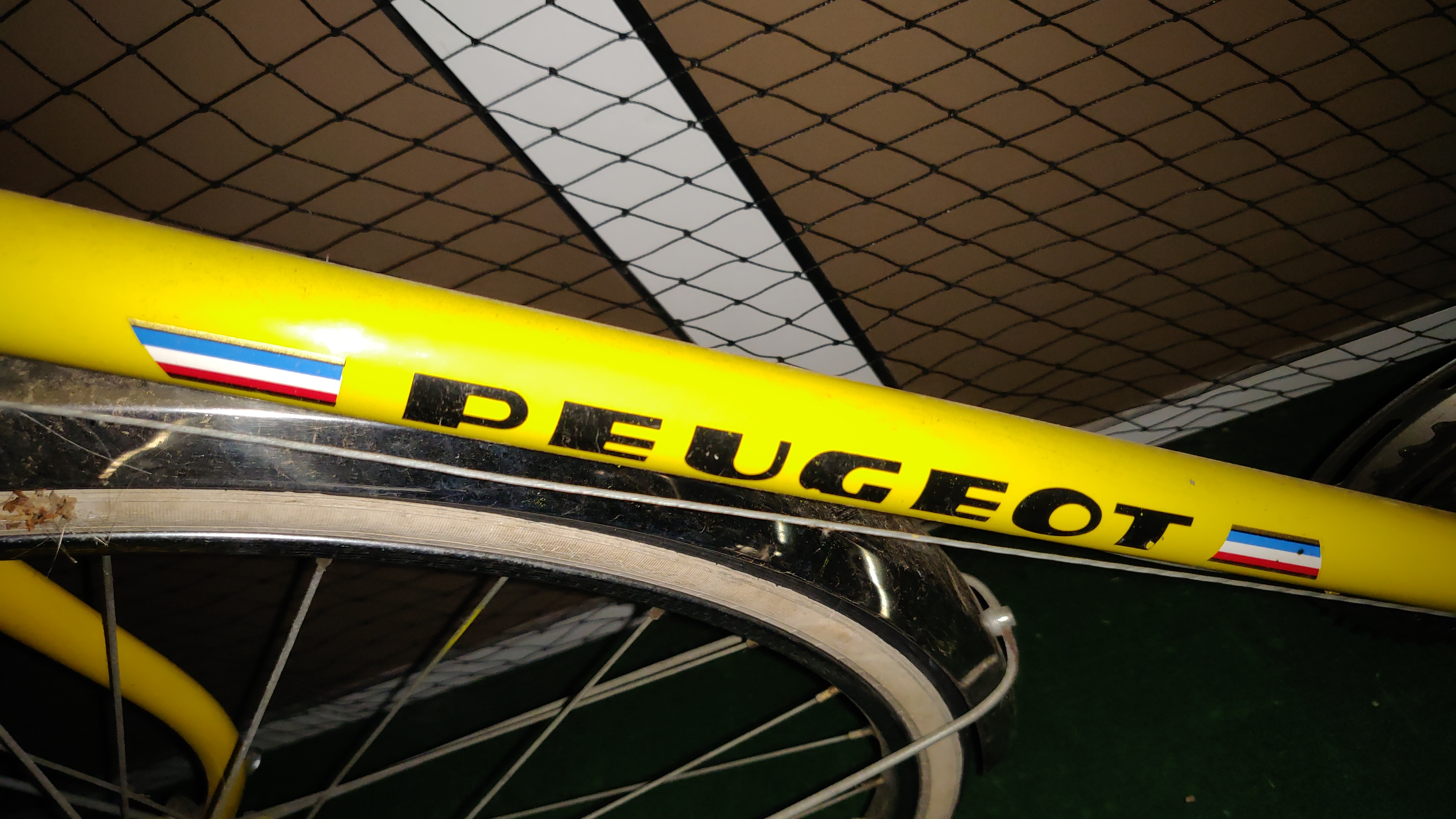 Down tube
The decals on Project Armadillo

So for now I conclude from circumstantial evidence that this is a 1976 Peugeot PL8/E.